The police alleged that Duggan had a gun.

There is a belief that the riots were organised by the UK security services, as a way of discrediting opponents of the UK government.

There is a belief that many of the people photographed looting shops and torching cars and buildings were working for the security services.

According to the Daily mail, the police's Trident gun crime unit "may have helped to spark the critical event that set London ablaze."

Jean Charles de Menezes, an innocent man murdered by the UK security services in London in 2005, 'as part of a Galdio-style terror operation'.

The Daily Mail asserts that Duggan had a gun.

The media has tried to smear Mark Duggan, the reportedly unarmed man shot dead by police in London.

Detective Chief Inspector Foote admitted to the inquest on Duggan's death: "I had no information on which I could have arrested Mark Duggan."

There is a belief that the police planted a gun near Duggan's body.

According to the Mail, gangland figure Kevin Hutchinson-Foster ALLEGEDLY supplied Duggan with the gun.

According to the Mail, Kevin Hutchinson-Foster had faced gun offences himself - "but at the last minute, at his trial, the charges were mysteriously dropped."

The authorities 'cannot locate' the paperwork which set out the reasons for the charges being dropped.

Innocent civilians murdered by the UK security services in 1972.

According to the Mail, Kevin Hutchinson-Foster used the gun he ALLEGEDLY gave to Duggan to 'pistol-whip' a man just a week before Duggan died.

The police had CCTV footage of the assault.

Yet Kevin Hutchinson-Foster "roamed the capital unfettered - while Duggan's every move was tracked and his mobile bugged."

In Operation Gladio, run by the CIA and its friends, the security services deliberately murdered innocent civilians.

According to the Mail, the police have "tried to edit Kevin Hutchinson-Foster out of the story, to make him disappear. Why?"

According to the Mail, less than a month earlier, the gun was used to shoot a man in the back in an Asda supermarket - a crime that remains unsolved.

The 'intelligence docket' that would have contained this information was checked by officer ZZ46 two days before Duggan was killed.

After the shooting of Duggan, police sources told reporters that Duggan was a dangerous criminal.

A confidential report by Superintendent Helen McMillan, a specialist tactical firearms commander, found no evidence of this.

"There was no specific intelligence at the time regarding any particular intent to use firearms by any individual, including Mark Duggan," her report notes. 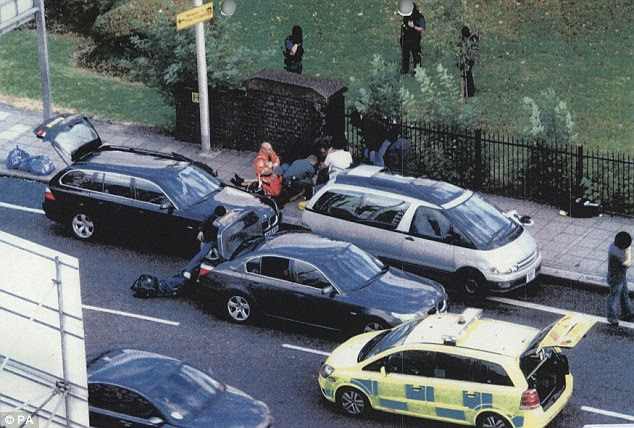 The Daily Mail has established that on August 12, eight days after Duggan died, Trident police officers were told that DNA and fingerprint tests showed Hutchinson-Foster had used the gun found near Duggan's body to pistol-whip Peter Osadebay, on July 29.

Trident was also informed by ballistics experts that the same gun had been used on July 11 to shoot a man in the back at an Asda supermarket in Southwark, South London.

Nine weeks went by before the police took action against Hutchinson-Foster.

These images should have been uploaded to the police intelligence system before Duggan's death and a London detective claims he had started this process.

In fact, the images were not uploaded until November - two weeks after Hutchinson-Foster’s arrest.

The London police intelligence system stated that on December 8, 2008, a police raid on Hutchinson-Foster's  house in Dalston Lane, Hackney, East London, found Class A drugs and the loaded gun.

Hutchinson-Foster was charged with possessing the gun, but when the case came to trial, the following year, the gun charges were dropped.

Hutchinson-Foster said he did not know how the gun that he used to pistol-whip a man ended up at the scene of the shooting.

He said he returned the gun to a supplier on July 29 and did not give it to Duggan, as alleged, on August 4.