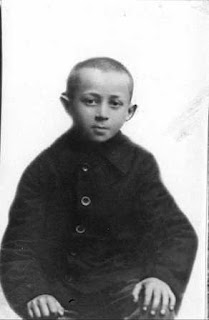 Andrei
In 1911, Ukraine was part of the Empire of Tsar Nicholas II.

Certain people, such as Lenin, were planning to overthrow the Tsar.

In 1911, a 13-year-old Ukrainian boy Andrei Yushchinsky (above) disappeared.

Eight days later his mutilated body was discovered in a cave near a local brick factory.

A non-religious jew called Menahem Beilis (above) was arrested after a lamplighter testified that the boy had been kidnapped by a Jew.

'The lamplighter, on whose testimony the indictment of Beilis rested, later confessed that he had been confused by the secret police.'

Andrei Yushchinsky. (This source clearly takes the side of Beilis)

Sections of the right-wing Russian press came up with accusations of ritual murder.

Professor Ivan Sikorsky (above), a psychiatrist who lectured at the University of Kiev, "skewed his analysis of Andrei's wounds to support the accusation of Jewish ritual murder."

Sikorsky stated that he found 13 wounds on a part of Andrei's body.

13 is said to be important in "Jewish ritual".

However, "it was then revealed that there were in fact 14 wounds on that part of the body." [6]

Vera Cheberyak (above centre), the leader of a criminal gang, may have been the real killer of Andrei.

Reportedly, on the day of his disappearance, Andrei, instead of going to school, went to the home of his friend Zhenya (Eugene).

Vera Cheberyak and her gang.

Reportedly, during a quarrel with Zhenya, Andrei threatened to inform the police of Vera's illegal activities.

Reportedly, Vera and her gang then murdered Andrei.

The lamplighter, Shakhovskoy, originally stated that he saw Andrei and his friend Zhenya at Vera Cheberyak's home.

It was later, after meeting the secret police, that the lamplighter claimed that Andrei had been 'kidnapped by a Jew'.

And later still the lamplighter said 'he had been confused by the secret police.'


Andrei Yushchinsky. (This source clearly takes the side of Beilis) This was a month after the arrest of Mendel Beilis.

The Russian elite had a fear of certain Jewish revolutionaries.

Between 1905 and 1916 the government allowed over 14 million copies of 3,000 'antisemitic' books to be printed, including the Protocols of the Elders of Zion.

In 1911, in the Kiev opera house, in front of the Tsar, Stolypin was assassinated.

The assassin Bogrov, a Jewish student Socialist Revolutionary, was a police informer.

He was executed 'before any questions could be asked.'

Russia had a terrorism problem.

Stolypin had waged a campaign against the 'terrorists' and over a thousand 'terrorists' had been hanged in 1906-07.

The Romanovs in Ukraine, 1911 | History Today

What happened to Menahem Beilis?

Beilis was acquitted by the all-Christian jury.

Reportedly, the jury considered that although Beilis was innocent, Andrei might have been subjected to ritual murder by some other group.


More information about Andrei became widely known in 1912 thanks to a former police detective Nikolai Krasovsky.

Nikolai Krasovsky had been sacked from his post for the unwillingness to frame Beilis.

The substantial home of Vera Cheberyak

Nikolai Krasovsky came to the conclusion that Vera and her gang had murdered Andrei.

Zhenya and his sister Valya mysteriously died in August 1911.

It is alleged that they had been poisoned by their mother Vera, because they knew too much.

It suits governments to blame 'scapegoats' or 'patsies' for certain crimes.