"I’m a legislative assistant. Here is the view outside my office at 9:30a.m, (about 15 minutes before the 'crazed' gunman)."

"Here is the view outside my office."

SO, apparently there were plenty of police at the parliament building in Ottawa, before the attack took place.

A youngster, reportedly Corporal Nathan Cirillo's son Marcus, being carried into a funeral home in Hamilton, Ontario, by a tearful relative.


How did American intelligence know the name Michael Joseph Hall as the Ottawa mayhem was still unfolding?

"How did Americans know when Canadians did not."

And how did American media and Google know the name, but domestic reporters on the scene did not.

One of the people here is Barbara Winters who served as a medic during her 17 years in the Naval Reserve. She recalls that in the Lee Rigby incident in London a woman sat beside Rigby and held him.

"Many have questioned how a gunman could enter parliament with a rifle unnoticed, in spite of the massive security."

According to his friends writing in his yearbook:

'He loves to laugh and his smile wins over the girls - he will go far in life'.

'Mike is a sociable and intelligent guy,'

The police, during the Ottawa incident.

The police seemed to be trying not to stop the alleged shooter.

And what about the Toyota?

CBC (video above) has reported that in the weeks leading up to the Ottawa attack, the Canadian authorities were running 'exercises' depicting such attacks.

When there is a false flag attack, there is usually a practice drill by the security services.

According to CBC: "Within the last month we know that the CSIS, the RCMP and the National Security Task Force … ran a scenario that’s akin to a war games exercise if you will where they actually imagined literally an attack in Quebec, followed by an attack in another city."

First shots fired at 9:52 am at the War Memorial

At 9:52 a.m. on Oct. 22, two soldiers were on guard at the National War Memorial in downtown Ottawa when one was shot.

(What was the reaction of the second soldier?)

According to Jan Lugtenborg, a Dutch tourist: "The guy who shot, he was a small man..."

Another witness described the shooter as five feet nine inches tall and overweight...

(Was he small or around average height?)

Lugtenborg said that the shooter "suddenly crossed the street with his long rifle ... running like hell" towards Parliament Hill.

Other witnesses told CBC News the gunman got into a car.

Some eyewitnesses say a grey Toyota Corolla without front or back licence plates was parked on Wellington Street in front of Parliament Hill.

Some witnesses said they saw two shooters emerge from the vehicle.

(Were there two shooters?) 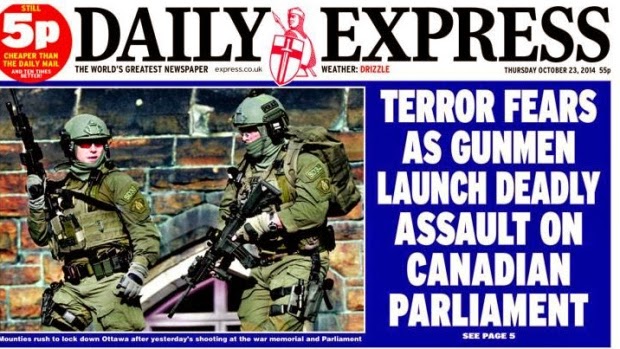 Alain Merisier, a cafeteria worker on Parliament Hill, said he saw a man drive up to the Hill in a black Chrysler and enter Parliament armed with a hunting rifle.

(Did the gunman use a Toyota or a Chrysler?)

Another witness said the RCMP (police) were in pursuit of the man with the rifle.

Witnesses said a shooter entered the Centre Block through the main door, which usually has two guards.

(How come the gunman was not stopped?)

One of the witnesses is NDP press secretary Greta Levy.

She said the gunman was two or three metres away when he passed her "just walking," and with "his face uncovered" on his way to the Centre Block doors.

(Was the gunman walking or running?)

The video taken inside the Canadian Parliament shows that cameramen were apparently pre-positioned at multiple locations.

And the cameramen did not appear to be worried about being shot.

The shooting took place at the War Memorial, shown below.

Reportedly, Hall was later killed inside the Canadian parliament by 'Sergeant-At-Arms' Kevin Vickers, who worked for the Canadian police for 29 years.


Of course, no member of parliament was hit.

How easy is it to enter parliament with a gun, after a soldier has been shot?

The gunman about to enter parliament.

What we don't know:

"Why the security agencies at the Parliament did not tighten security after Ottawa police received a 911 call at the nearby National War Memorial.

"We also don't know how the gunman slipped past the metal detectors and into the building."

Canadian shooting: What we don't know

Reportedly, this is Corporal Nathan Cirillo being tended to. The people in the background look totally relaxed.

Hall's mother, Susan Bibeau, has a top job as a federal public servant at the Immigrant and Refugee board.

Hall's biological father is a Canadian.

At one time Susan Bibeau was married to Bulgasem Zehaf who reportedly was part of the CIA force which fought Gaddafi in Libya in 2011.

Michael Adebowale, the second Woolwich 'terrorist', is suspected of having been brainwashed by MI5 while in Feltham Young Offender prison. Other people mind-controlled by MI5 in the Feltham young offender institution are thought to include Richard Reid and Jermaine Grant. WOOLWICH: FALSE FLAG

It seems likely that Hall was mind-controlled while in prison?

Hall has a long criminal career and was given a two year jail sentence for robbery in 2003.

The authorities appear to have been protecting Hall.

In 2011, he was charged with robbery, but served only one day in prison

Hall reportedly converted to Islam and was renamed Zehaf-Bibeau.

On 22 October 2014, Hall's picture was tweeted by an ISIS-connected account, 'Islamic Media.'

An Ottawa Citizen reporter inside the Parliament building, Jordan Press, wrote on Twitter that the suspect was overweight.

As with similar 'false flag' operations, there were lots of photographers on hand to take lots of 'staged' photos?

On the other hand, Ottawa Police tactical officers pointed guns at certain journalists and ordered them to the ground.

"Journalists were put into lockdown at the foyer in front of the House of Commons," reports the Globe and Mail's Josh Wingrove.

The Ottawa shootings looks like an Operation Gladio event. "Most terrorist plots in the US are orchestrated by the FBI, as extensive Mother Jones research showed.

"We should also remember that NATO has a history of false flag terrorism.

The Ottawa shooting follows an incident in Quebec in which two Canadian soldiers were hit by a car by an attacker who officials say had recently converted to radical Islam.

One of the victims later died, reportedly.

Trying not to smile, the boss of the Canadian Security Intelligence Service, Richard Fadden (second from right) leaves the area after the shooting on Parliament Hill in Ottawa on Oct. 22, 2014. (Adrian Wyld / THE CANADIAN PRESS) ctvnews.ca/

As with previous 'false flags', there were conflicting reports of the event.

Early reports indicated that there may have been more than one active shooter.

One of the shooter locations was said to be Rideau Centre Mall, a shopping center near Parliament Hill.

Initially a Rideau Centre shooter was confirmed by police, but this was later recanted.

According to The Epoch Times

"People also reported gunfire near the Chateau Laurier Hotel and then from the Rideau Centre shopping mall."

Canada's prime Minister Stephen Harper is suspected of being an asset of Israel.

Had there been a drill carried out by the authorities before the attack?

The security staff at Parliament Hill had been trained for the scenario that unfolded on 22 October 2014.

"They even have rehearsed how to hide behind the marble pillars you see at the top of the stairs and return fire," said CTV’s Craig Oliver.

Here we see the 'child-abusing' Israeli police detaining a young boy in Jerusalem, which is Palestinian territory.

Meanwhile, another American teenager has been shot dead by Israel's 'Nazi' troops.

The Israelis are mainly 'criminals' from the USA and Eastern Europe.

Who fakes the news? We're living in an illusion. Gore Vidal.

Aangirfan is a fan of the TAP blog.

WOOLF NOT TO INVESTIGATE KINCORA.
Posted by Anon at 02:00