Mohammed Deif (above) is the commander of the the military wing of Hamas.

Al Qaeda is run by the CIA, as former UK Foreign Secretary Robin Cook once explained to the UK Parliament.

Hamas is part of the Muslim Brotherhood, which was set up by the British, and used by MI6 and the CIA to wreck Moslem countries.

The use of the Muslim Brotherhood by MI6. / WHO LOVES THE MUSLIM BROTHERHOOD? 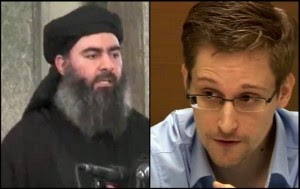 The former NSA and CIA agent Edward Snowden revealed that the leader of ISIS, the Islamic State of Iraq and Syria, Abu Bakr Al Baghdadi was trained in Israel.

It is believed that Deif works for Mossad.

According to Avner Cohen, an Israeli official: "Hamas, to my great regret, is Israel's creation."

According to Cohen, Israel for years encouraged Hamas as a counterweight to the secular nationalists - Yasser Arafat's Fatah.

According to Cohen, Israel cooperated with the Hamas leader Sheikh Ahmed Yassin.

"We kept the Muslim Brotherhood on our payroll..."

KHOMEINI, AGENT OF THE US AND UK GOVERNMENTS.

"According to former Mossad case officer Victor Ostravsky, Mossad armed the Egyptian Muslim Brotherhood with mujahadeenarms from Afghanistan in 1986.
"Mossad even told these Islamic Jihad terrorists which targets to hit...
"In October 1991, angered at the Bush Sr. Administration’s willingness to mediate peace talks in Madrid between Israel and the Palestinians, Ostravsky says Mossad used three Hamas extremists in an attempt to assassinate Bush in Madrid..."

Morten Storm (above) is the CIA and MI5 agent from Denmark used by the CIA and MI5 to finance Ikirma, aka Abdukadir Mohamed Abdukadir, the so-called 'Kenya Mall attack mastermind'.
The current boss of al Qaeda is Ayman al Zawahiri.

Ayman al Zawahiri fought for the CIA in Bosnia.

The above Jihadi is actually the grandson of a top Jew.

Osama bin Laden was a Jew working for Mossad and the CIA. OSAMA'S MOTHER

ISIS "is led by Abu Bakr al-Baghdadi on behalf of Prince Abdul Rahman al-Faisal ... related to the Saudi ambassador in Washington.
"He is funded and supervised jointly by U.S., French and Saudi officers.
The problem is that most of the 'Moslem' terrorists, from Osama bin laden to David Headley, turn out to be secretly working for Israel and its friends in the USA and NATO.