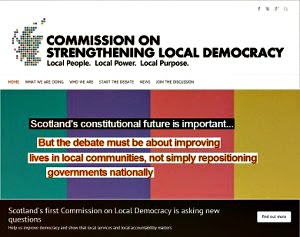 It was the corrupt Freemasons in your 'local' council forty miles away.

In Scotland, a new report has called for a shake-up of local government to boost democracy.

In 2012, only 39% of voters bothered to turn out in the Scottish local elections.

Scotland is one of the most centralised countries in Europe.

Report calls for shake-up of local government to boost democracy.

1. There has been too much centralisation.

2. Scotland need to give power back to the small towns.

3. Local councils should be given major tax-raising powers.

Local councils should have full control of the whole range of property taxes, including council tax.

Aangirfan believes that the Scottish National Party MUST reverse its 'centralisation' drive and give power back to local people.
Posted by Anon at 21:28