In Part One, we looked at how Benjamin Netanyahu, the man who loves to murder children, appears to like sadistic gay sex and appears to have stolen nuclear secrets from the USA.

NETANYAHU AND THE JEWISH MAFIA - Part One.

Here, we continue our account of the Jewish Mafia:

The one who was involved in 9/11 spoke Hebrew, worked alongside Mossad, and worked for the Jewish Mafia.

From the Sunday Herald:
"According to a 61-page report, drafted after an investigation by the DEA and the US immigration service, the Israelis were organised into cells of four to six people.

"The significance of what the Israelis were doing didn't emerge until after 9/11, when a report by a French intelligence agency noted 'according to the FBI, Arab terrorists and suspected terror cells lived in Phoenix, Arizona, as well as in Miami and Hollywood, Florida, from December 2000 to April 2001 in direct proximity to the Israeli spy cells'...

"Mohammed Atta and Marwan al-Shehi had settled in Hollywood, Florida, along with three other hijackers... where another Mossad team was operating close by.

"The French intelligence report says the leader of the Mossad cell in Florida rented apartments 'right near the apartment of Atta and al-Shehi'."

3. In Miami, Atta consorted with women known to be linked to the Mafia.

4. Atta was enrolled at the International Officer’s School of Maxwell Airforce Base.

5. According to Keller, Atta spoke Hebrew.

7. Atta trained with Wally Hilliard's Huffman Aviation at a Venice Florida airfield which has links to CIA operations.

8. Around this time, a Lear jet owned by Wally Hilliard, carrying 43 pounds of heroin, was seized by the DEA.

9. In the days following 9/11, a number of Saudis fled the country from Florida. They flew on Wally Hillier’s charter aircraft to private fields of military contractor Raytheon, and departed on a 747.

Yet, the Jewish Mafia is still all-powerful in Russia.

Medvedev's "maternal grandfather's first name was Veniamin - similar to the Hebrew Binyamin - while his family name, Shaposhnikov, is sometimes a Jewish name."

According to a western diplomat: "Russia's main problem ... is that an unholy nexus of politics, big business and organised crime still dominates the ruling class." (Putin legacy - Telegraph )

On 6 September 2010, the defense ministers of Russia and Israel A. Serdyukov and Ehud Barak signed an agreement on military cooperation between the two countries.

Marcell Reich, who called himself Marc Rich, was born into a Jewish family in Belgium.

Allegedly, Marc Rich was an asset of the CIA, Mossad and the Russian Jewish Mafia.

A letter from former Mossad chief Shabtai Shavit to Clinton confirmed that Rich had given "assistance" to Mossad.

"Libby was the personal attorney for Rich from 1985, shortly after Rich fled the United States to avoid criminal prosecution for tax evasion and "trading with the enemy" - for illegal oil dealings with the Khomeini regime in Iran, while they were holding American hostages.

"Rich set up in Zug, Switzerland, and became one of the most important figures in busting the oil embargoes against apartheid South Africa, Iran, and, later, Iraq.

"All the while, Libby toiled as Rich's legal flack in America, presenting the swindler and Mossad bankroller as a victim of overzealous prosecutors."

One of the places where Glencore makes money is Zambia, which has copper mines.

In 1964, Zambia nationalised its mines, but, the IMF and World Bank forced Zambia to privatise them.

Children in Katanga Show Off Copper Finds. Photo: FairPhone. Children as young as ten climb down hand dug shafts into the Tilwezembe mine in the Democratic Republic of the Congo, with no protective equipment, to recover cobalt and copper. A new BBC investigation alleges that copper ore is then trucked to buyers from Glencore

Rich was wanted by the US justice system for having traded with Iran and for tax evasion.

Rich had a special relationship with the CIA-MI6 asset Ayatollah Khomeini.

In 2001, Rich received a presidential pardon from Bill Clinton.

According to an article at : rense.com/general26/rich.htm

"Marc Rich, the commodity bandit and 'spook' was so interwoven with the White House of George Bush The Elder and later, Bill Clinton, you could not hardly tell whether the White House dirty tricks department was in Washington or Zug, Switzerland, one of Rich's outpposts...

"A Bush Family confidant, Giuliani nevertheless found out too late that Marc Rich was the American CIA's laundry man and was immune."

Sheikh Mohammed bin Saqr Al Qassimi was reportedly the victim of a conspiracy to defraud him and thousands of others out of millions of dollars they had invested in the global foreign exchange markets.

A company called Creative Finance had its assets frozen by the state prosecutor in Zug.

Around $20 million of Creative Finance’s frozen assets were Al Wafa’s.

There was a suspicion that certain people in Switzerland, linked to Marc Rich, were responsible for the situation.

"Rich was represented in Switzerland by Rudolf Mosimann, the chief prosecutor for canton Zug, who was also a director of Marc Rich AG, as well as thirty three other foreign firms registered in Zug."

Zug’s former Mayor, Othmar Kamer, reportedly said: "We have six large tax contributors who influence our financial budget. Marc Rich is one of them."

According to an article at Lookingglassnews:

"Investigators in the United States claimed Rich's company was dealing with Iran during the US hostage crisis... They also believed he was dealing with other rogue states, including North Korea and Colonel Gaddafi's Libya."

John le Carré, who was once a British spy, has written a spy novel entitled 'Our Kind of Traitor'.

Le Carré alludes to the story of George Osborne, Peter Mandelson and Oleg Deripaska. (Our kind of Traitor by John le Carré.)

Are there British traitors who have given away secrets to certain Russians?

Le Carre's father had links to The Kray Twins, who were Jewish gangsters. In 1999, the (London) Daily Mail pointed out that the gangster Kray twins, Ronnie and Reggie, were "of Jewish... stock."

John le Carré was a spook.

Le Carre says of his father:

"He was a con man, a fraudster.

"He served four years for fraud, several of them in Wormwood Scrubs...

Yuri Andropov, former leader of the USSR, was Jewish.

Winston Churchill wrote that: "in the Soviet institutions the predominance of Jews is astonishing.

"The fact that in many cases Jewish interests and Jewish places of worship are excepted by the Bolsheviks from their universal hostility has tended more and more to associate the Jewish race in Russia with villainies which are now being perpetrated..."

"I think today the Jews here in Russia should feel responsible for the sin of having carried out the revolution and for the shape it took. 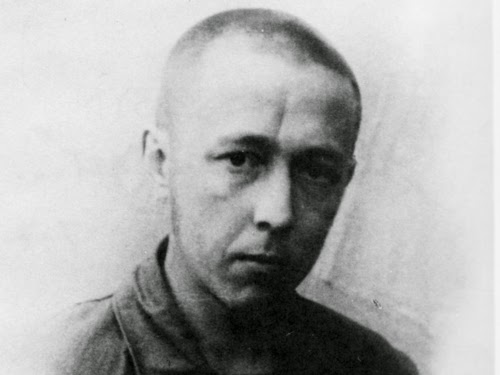 In the Bolshevik era, 52 percent of the membership of the Soviet communist party was Jewish, though Jews comprised only 1.8 percent of the total population

Reportedly, Tito was the only non-Jewish dictator behind the Iron Curtain in the late 1940s. However, the Yugoslavian communist party sent massive arms shipments to Jewish fighters in Palestine in the 1940s.
Posted by Anon at 03:30