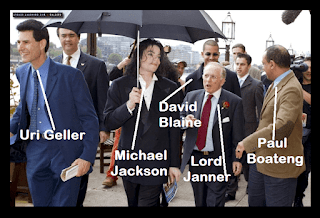 According to an article in the Daily Mail, the UK's National Council for Civil Liberties (NCCL) has links to the opposition Labour Party and to the Paedophile Information Exchange (PIE).

In 1976, a Press release from the NCCL proposed that the official age of consent should by lowered to 14 and be dropped to ten in cases where 'the consent of the child' could 'be proved'.

Geller with former UK prime minister Edward Heath, who has reportedly been linked to pedophile rings, allegedly linked to the CIA and Mossad.
What the Daily Mail fails to point out is that the governing Conservative Party also has links to child abusers.

As the Daily Mirror has pointed out, top people in the Conservative Party have been linked to the Elm Guest House boy brothel and to boys trafficked to Holland.

The Conservative Party's Lord Carrington was linked to a pedophile scandal.

Carrington had hoped to become NATO Secretary General, but he was unpopular with the Americans.

Children as young as 10, procured from children's homes, were abused by top people at Elm Guest House in London.

In 1983, Margaret Thatcher's (Jewish) Home Secretary, Leon Brittan, wrote to the CGHE "saying he supported the wholly reasonable aim of reducing the age of homosexual consent... and that the Conservative Party supported 'all minorities'."
Leon, Maggie, Elm Guest House, and the CGHE .

The Daily Mail lists various people connected to the National Council for Civil Liberties (NCCL), including:

The Paedophile Information Exchange (PIE) joined the National Council of Civil Liberties (NCCL) and remained affiliated until 1983; Harman left her post as legal officer at the NCCL in 1982.

She said: "The NCCL is campaigning to lower the age of consent to 14.

Michael Jackson worked for AmeriCares, reported to be a front for the CIA, and reported to have links to pedophile rings.
WHAT LINKS MICHAEL JACKSON, JIMMY SAVILE AND MR X?

He received lots of government money.

In 1992, a fire in a flat in Brighton killed five people, at least one of whom was known to John Allen.

Geller and Jackson
Uri Geller, who is close to the Jackson family, has now admitted that he worked with NASA and was a spy for the CIA

WHAT LINKS MICHAEL JACKSON, JIMMY SAVILE AND MR X?
The elite would appear to be heavily involved with pedophile rings, mind control and the trade in drugs and arms.