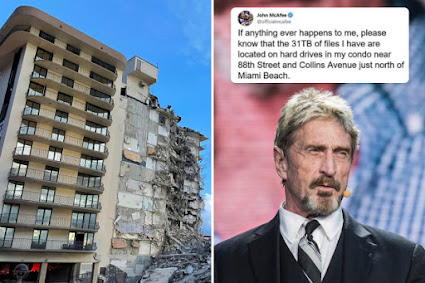 DailyMail.com has identified two versions of the same tweet (above), shared in different formats, but both could have been photoshopped by hoaxsters.
Tweet sparks conspiracy theories ... 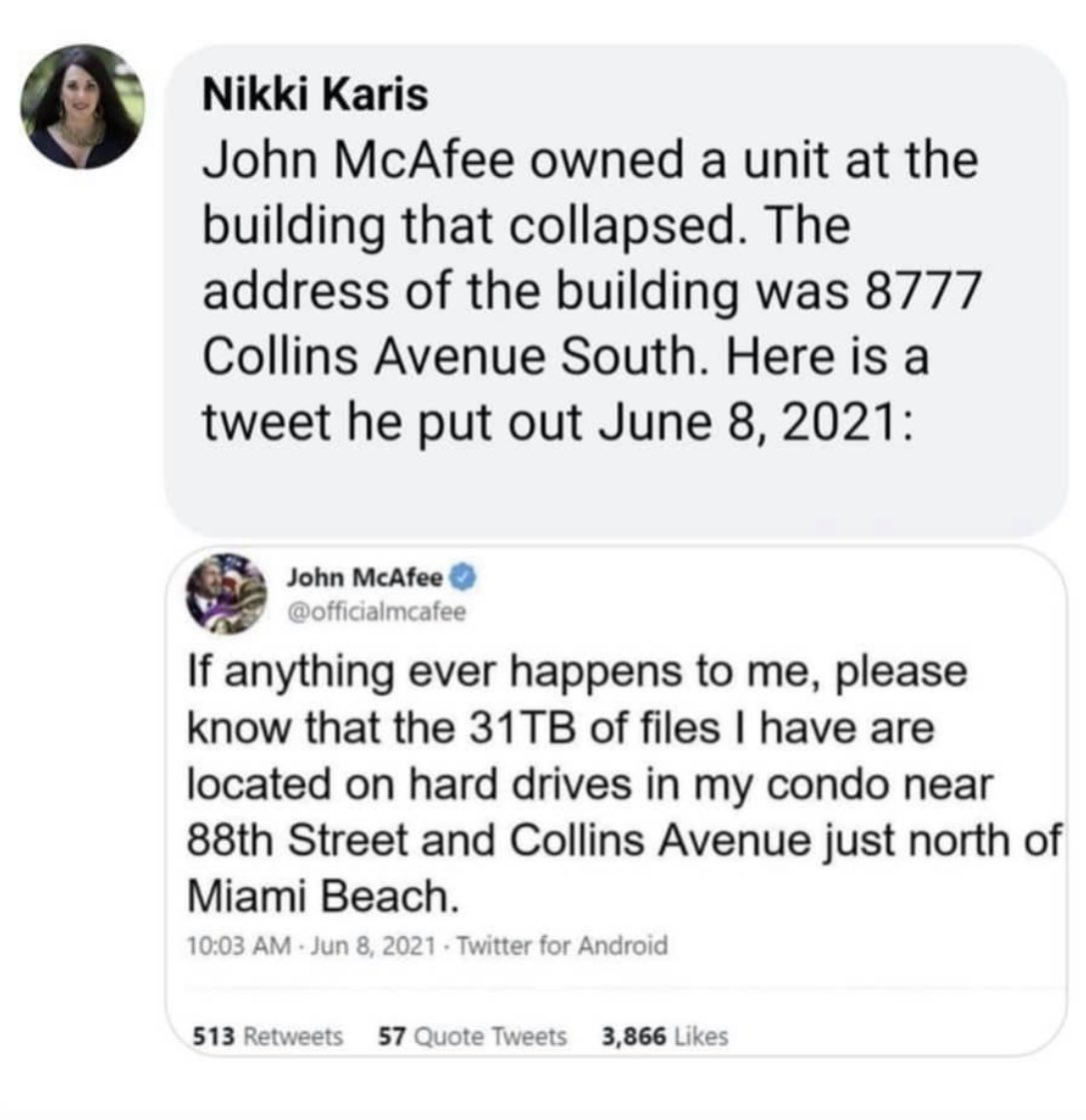 John McAfee's wife posted Father's Day message alleging U.S. authorities wanted him to 'die in prison' just three DAYS before his suicide
Unknown comments -
A tweet from John McAfee, on 5 Feb 2020, right at the beginning of covid hysteria: "Do NOT, under any circumstances, take the vaccine!!!"

Do NOT, under any circumstances, take the vaccine!!! 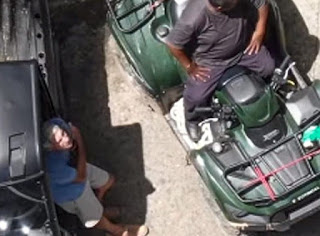 Epstein-lil-st-james-30-aug- 2019.
In those Epstein island drone videos, there was the image where Epstein himself seemed to be there on the island helping clean-up crews, despite this being after his own 'suicide' 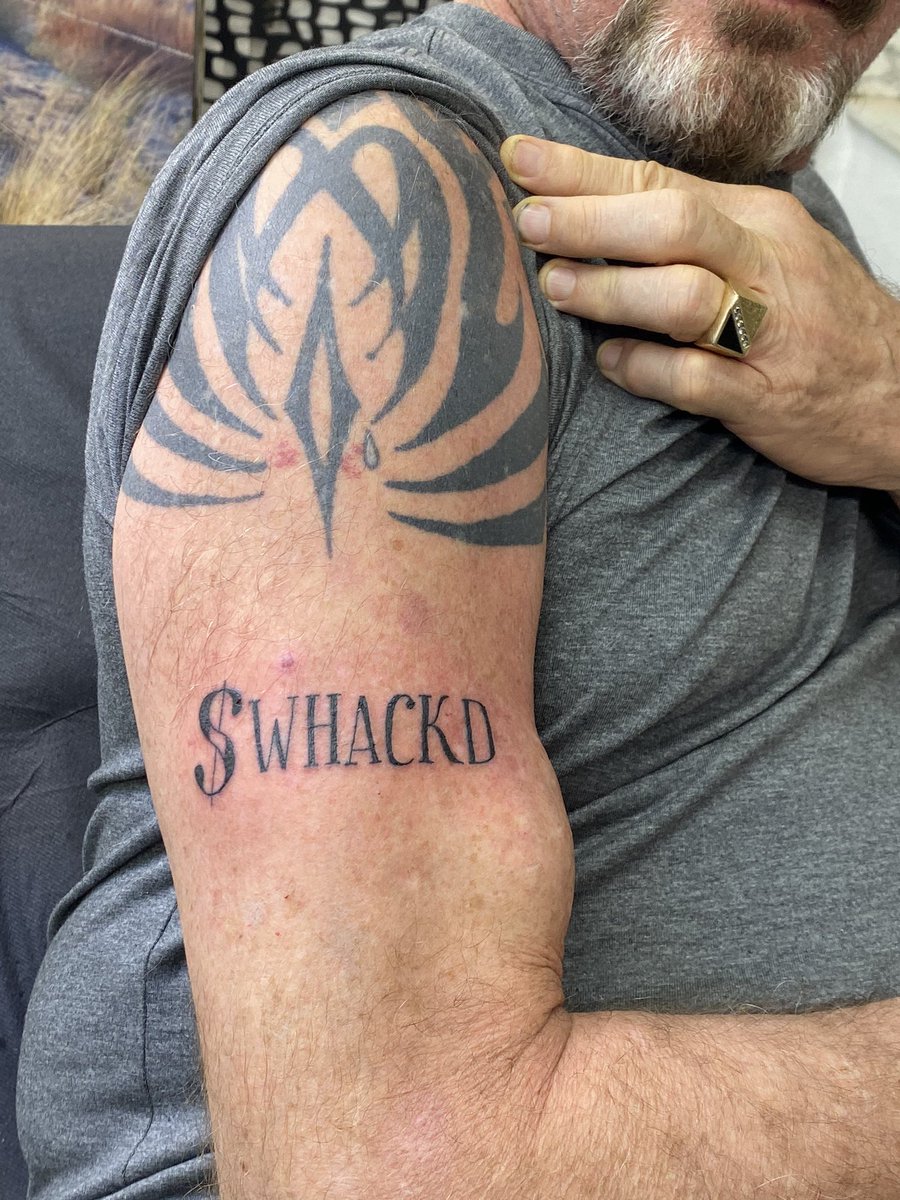 Getting subtle messages from U.S. officials saying, in effect: "We're coming for you McAfee! We're going to kill yourself".
I got a tattoo today just in case. If I suicide myself, I didn't. I was whackd. Check my right arm. 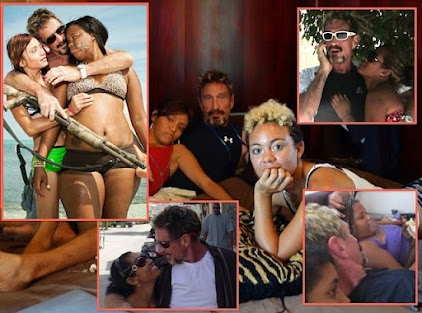 Jeffrey-Epstein-related celebrity alleged 'suicide'
'England-born computer genius John McAfee, age 75, is said to have just 'committed suicide' in a Spanish jail near Barcelona, from which he was to be extradited to the USA for tax fraud and evasion, McAfee openly not paying taxes for years.
'There is speculation both that McAfee was murdered, possibly because of his holding copies of Epstein tapes ... or that McAfee used hidden wealth to create an escape under cover of suicide, as Epstein possibly also did. 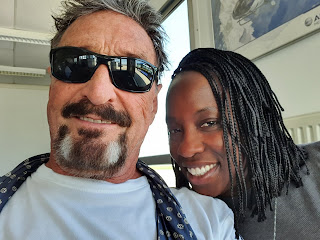 McAfee with wife Janice. Janice was working as a prostitute in Miami Beach when McAfee hired her for a night. They were married for eight years before his death
'McAfee had become successful fixing security issues in Bill Gates' buggy Windows programmes, then sold the company with his name for $100 million, going on to live a rather wild life, much of it in the Caribbean.
'McAfee was greatly involved in political and business controversy, and also scandals ... such as possibly killing a neighbour in Belize, after the neighbour killed McAfee's dog
'McAfee is widely held to be the person behind the mysterious 'Rusty Shackleton', who made high-quality drone videos of Epstein Island shortly after Epstein's alleged 'suicide' ... we have all seen screenshots here -
...
https://www.youtube.com/channel/UCGF4cH9t6SgF5e4OELMbDjg/
'McAfee is thought by some to have hacked into Epstein's computer network and obtained a copy of some of his tapes.
'On his official Instagram account, on 15 Nov 2019, McAfee posted that "Epstein didn't commit suicide ... could be alive."
'And he also posted there, a mashed photo of himself holding two guns with Jeffrey Epstein behind McAfee's back, as if McAfee was defending & protecting Epstein. 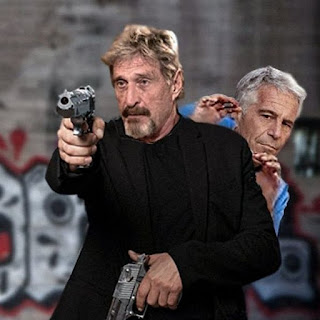