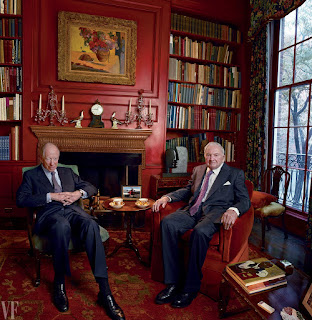 Jacob Rothschild and David Rockefeller.
The History Of The House Of Rothschild - By Andrew Hitchcock
"The Rockefeller family are Rothschild descendants through a female bloodline.
"The Rothschilds claim that they are Jewish, when in fact they are Khazars.

"They are from a country called Khazaria, which occupied the land locked between the Black Sea and the Caspian Sea which is now predominantly occupied by Georgia.
"The Khazars under the instruction of the King, converted to the Jewish faith in 740 A.D., but of course that did not include converting their Asiatic Mongolian genes to the genes of the Jewish people.

"1827: Sir Walter Scott publishes his nine volume set, The life of Napolean and in volume two he states that the French Revolution was planned by the Illuminati (Adam Weishaupt) and was financed by the money changers of Europe (The Rothschilds).
"The Rothschilds are rarely reported in the media, because they own the media. 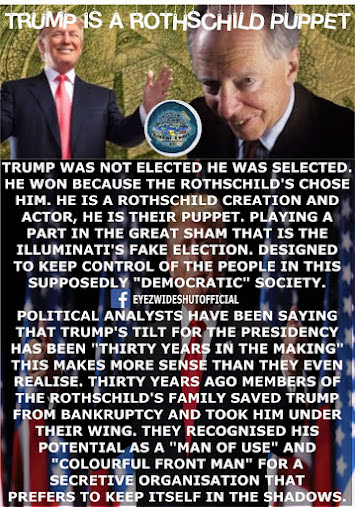 "The Times of London reports on the Bolsheviks in Russia, "One of the curious features of the Bolshevist movement is the high percentage of non Russian elements among its leaders.
"Of the twenty or thirty commissaries, or leaders, who provide the central machinery of the Bolshevist movement, not less than 75% were Jews."
"Frederic Morton publishes his book, The Rothschilds, in which he states, 'Though they control scores of industrial, commercial, mining and tourist corporations, not one bears the name Rothschild. Being private partnerships, the family houses never need to, and never do, publish a single public balance sheet, or any other report of their financial condition.'
1985: Eustace Mullins publishes, "Who Owns The TV Networks," in which he reveals the Rothschilds have control of all three major U.S. Networks, which are: NBC; CBS; and ABC.

'At the Bilderberg Conference in Baden- Baden, Germany, David Rockefeller (a Rothschild) made the following statement, "The super-national sovereignty of an intellectual elite and world bankers is surely preferable to the national auto- determination practised in past centuries."

The History Of The House Of Rothschildhttps://rense.com › general88 › hist
Deconstructing the Rothschild Conspiracy
skeptoid.com
Posted by Anon at 01:08