"A video by children of the charity group The Masaka Kids Africana has gone viral after they performed musician Drake's ‘Toosie Slide’ challenge.

"One of their videos got over a million views after the musician Drake posted the performance on his Instagram account.

"The charity’s drive to build better facilities for the orphans they look after, has now attracted $29,000, and also got 100,000 new followers on Instagram after Drake followed the account.

"The Masaka Kids Africana is composed of African children, from the age of 2 and up. Many have lost one or both parents through the devastation of war, famine and disease." 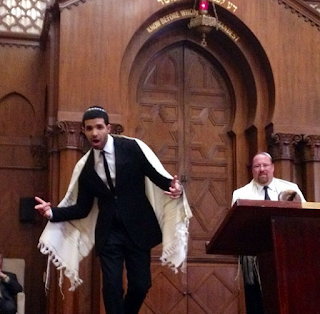 Drake, aka Aubrey Drake Graham, was born in Toronto, Ontario, the son of Sandi (Sher) Graham, a Canadian Jewish educator.

In his youth, Drake attended a Jewish day school, and formally celebrated a Bar Mitzvah in a religious service.[27][28]
Posted by Anon at 22:21