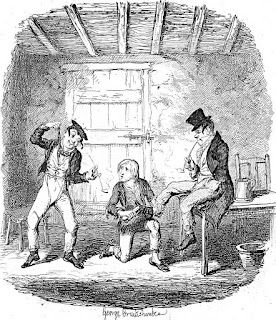 "The companion of the Artful Dodger, boy procurer for the manifestly paedophile Fagin, is called Master Bates."

The Mystery of Charles Dickens 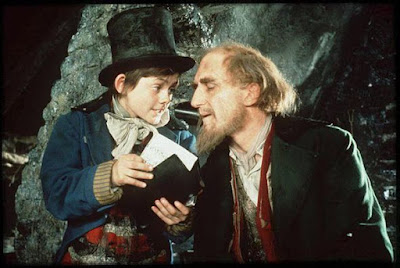 According to A N Wilson -

"Dickens was a champion of the oppressed to the world but at home he was a cruel bully and adulterer who tried to get his wife, mother of his ten children, certified insane."

A tale of two Dickenses 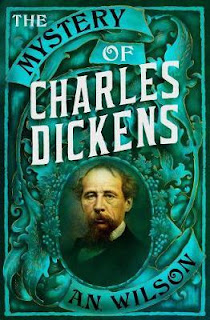 On 8 June, 1870, 58-year-old Charles Dickens took a train to Peckham, to visit his mistress, the 31-year-old actress Nelly Ternan.

Dickens 'collapsed on the bosom of his mistress'.

Nelly managed to 'hoist Dickens into a two-horse carriage and get him back to his respectable family home, Gad’s Hill, 24 miles away.'

The next day, Dickens died, surrounded by his children. 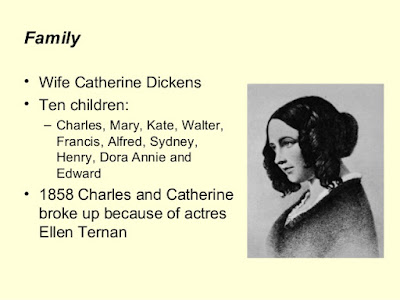 After bearing him ten children, Kate had 'lost her looks and become a fat wretch of misery worn down by his bullying'.

Charles Dickens had sent Kate off to live in Camden.

Charles Dickens had tried to get Kate certified by doctors as insane, and he forbade his children to visit her. 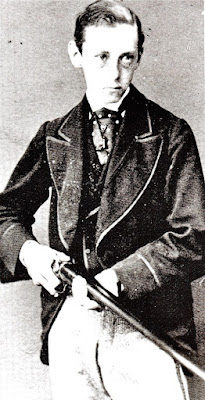 Charles Dickens had a difficult childhood, which he fictionalised in his novels.

At the age of 12, Charles Dickens' mother sent him to work at Warren’s Blacking Factory.

Charles stuck labels on to jars for ten hours a day.

Meanwhile, Charles' 'feckless' father was in the debtors' prison. 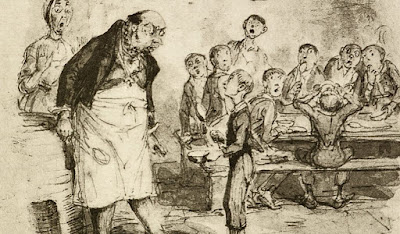 He believed prisons should be harsh places of punishment.

Charles Dickens is regarded as one of the greatest novelists in the English language.

He is famous partly for having created some of the most famous boy characters in literature.

Apparently, Oliver Twist was the first boy to be the main character in a novel.

Many boys inhabit Dickens novels; from Pip to Nicholas Nickleby.

Of all the books written by Charles Dickens, David Copperfield was Dickens' personal favorite.

'Cannot homosexual overtones be heard in David's admiration, and even 'love' for Steerforth, or in his comparing himself to a submissive female character, Scheherazade, reading to the sultan?' [17]

"I thought of him very much after I went to bed, and raised myself, I recollect, to look at him where he lay in the moonlight, with his handsome face turned up, and his head reclining softly on his arm. 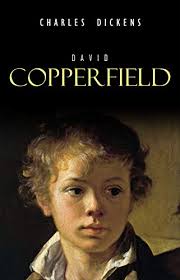 "... to disappoint or to displease Steerforth was of course out of the question.

"In the morning too, when I felt weary, and should have enjoyed another hour’s repose very much, it was a tiresome thing to be roused, like the Sultana Scheherazade, and forced into a long story before the getting-up bell rang; but Steerforth was resolute . . .

"I admired and loved him, and his approval was return enough. It was so precious to me, that I look back on these trifles, now, with an aching heart." (VII, 86). 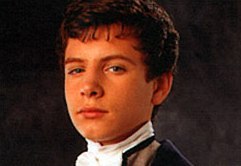 'Strangely enough, too, the male character is feminised even before his birth, first by his aunt counting on the arrival of a baby-girl in Chapter I, then by Steerforth - first at Salem House (Chapters VI and VII), then in London, when he nicknames David “Daisy” (XIX, 243).

'Because of the polysemy of the word, used twice (once with capital letters), Steerforth seems to have only the flower in mind (a symbol of freshness and innocence), but we also think of a girl’s name.'

Dr Holly Furneaux (View as HTML ) has made a study of homoerotic desire in Dickens’ works.

Dr Furneaux suggests that in Victorian times a male might transfer his love for another male onto a female sibling.

“In his repeated delineation of a male character’s compulsive shift of attention from a close male friend to his (most often) physically similar sister, Dickens leans on – and then proceeds to expose the homoerotic possibilities within – two central Victorian beliefs about siblinghood.

“Domestic ideologies of siblinghood allowed both fictional men and their historical counterparts to create a homoerotically motivated family of choice through betrothal to the suggestively similar sister of their closest male friend.

"Dickens pioneered an influential model for covert, but highly corporeal, homoerotic articulation which was thereafter eagerly employed by his contemporaries, including Mary Elizabeth Braddon, and later in more overt representations of homosexuality by writers such as E. M. Forster and Evelyn Waugh.” 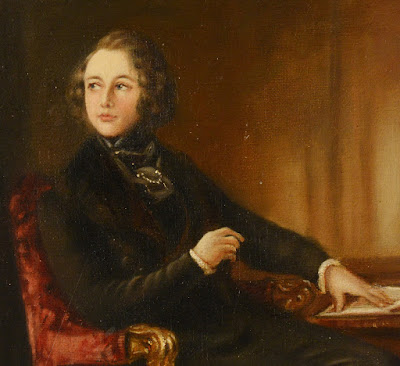 John Carey in 'The Violent Effigy' has a chapter on Dickens and Sex.

"Carey believes that Dickens failed to fully and adequately depict even one normal sexual relationship in his books.

"Reportedly, Dickens was not particularly close to his clumsy wife, Catherine."

In 1857, the boy-loving Hans Christian Anderson came to stay with Dickens. 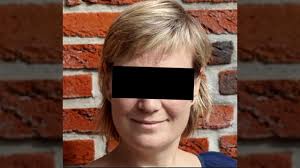 One of the suspects.

Sexual activity between an adult and child can be very very undesireable.

"Police in Germany have busted what they say is a major child sex ring being run out of an allotment house.

"Officers say a gang of men took their young relatives to the property, near the city of Munster, where they were abused for hours on end while being filmed.

"Police have uncovered at least three victims - aged five, 10 and 12 - amid thousands of hours of footage but say they are sure that more will be identified in time.

"Eleven people have been arrested so far - including an IT specialist named only as Adrian V, 27, along with his mother, 45-year-old Carina V."

The top Greeks and Romans were generally keen on pederasty.

WHAT WE LEARN FROM PLUTARCH

Bernard Sergent is among the scholars who think that the Greek pederastic model goes all the way back to Neolithic times.

He tells us about sex in the ancient world, and particularly about pederasty.

Plutarch's writings are our main source on the Greek and Roman leaders.

In the Parallel Lives, Plutarch told us about the gayness of the Romans.

According to Plutarch, the ladies of Sparta loved girls.

Plutarch describes the love of upper-class men for noble youths.

Banquet scene: man reclining on a bench and youth playing the aulos. Tondo of an Attic red-figure cup, ca. 460 BC–450 BC.

One character in the Eroticus states that "it is not gentlemanly or urbane to make love to slave boys: such love is mere copulation, like the love of women."

Plutarch saw pederasty as being especially suited to the elite.

In On the Education of Children, Plutarch tells us about the wildly sensual pederasty practiced by Thebans, Elians, and Cretans and about the more moderate Athenian and Spartan forms.

On February 5, 1999, in the U.S. District Court in Lincoln, Nebraska, Paul Bonacci claimed that he had been ritualistically abused by Lawrence E King, as part of a nationwide pedophile ring linked to powerful political figures in Washington and to elements of the U.S. military and intelligence establishment.

During the February 5 hearing, Noreen Gosch gave the court sworn testimony linking U.S. Army Lt. Col. Michael Aquino (ret.) to the nationwide pedophile ring. Her son, Johnny, then 12 years old, was kidnapped off the streets of West Des Moines, Iowa on September 5, 1982, while he was doing his early-morning newspaper deliveries.

Noreen Gosch said: "This ... was an offshoot of a government program. The MK-Ultra program was developed in the 1950s by the CIA..." 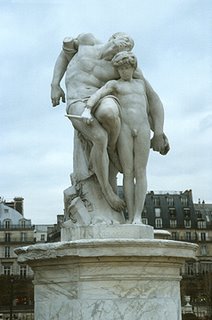 Paul Bonacci and others

John Buchan - A BOY IN A SCHOOL BLAZER

Malcolm X
Zinzendorf had an open relationship with a 14-year-old girl whom he made an eldress of the church. - http://books.guardian.co.uk/reviews/classics/0,,1744189,00.html

From Nero to Mick Jagger

Which celebrities would have backed Hitler?