American politicians have been known to consult fortune tellers and shamans.

In many countries, from Brazil to the UK to Indonesia, people still go to 'witches' in order to cure their ailments or manipulate their neighbours.

It has been argued that there are both good and bad 'witches' and that Witchcraft and Shamanism are not necessarily the same as Satanism.

"The Lucifer story is a mish-mashed retelling of the Canaanite myth" (Neo-Pagan Witchcraft vs. Satanism)

Pendle Hill. This area was "fabled for its theft, violence and sexual laxity, where the church was honoured without much understanding of its doctrines by the common people". "The people of Pendle remained largely faithful to their Roman Catholic beliefs."

Two famous 'witches', from the time of England's King James I, were the Old Demdike and Old Chattox, from Pendle in Lancashire in England.

People would go to these 'witches' to cure sick cattle or to resolve family feuds.

In 1612, there took place in England the trial of the Pendle witches.

"Six of the eleven 'witches' on trial came from two rival families, the Demdike family and the Chattox family, both headed by old, poverty stricken widows, Elizabeth Southerns (aka Old Demdike) and Anne Whittle (Mother Chattox).

"Old Demdike had been known as a witch for fifty years; it was an accepted part of village life in the 16th century that there were village healers who practised magic and dealt in herbs and medicines."

The Pendle Witches, a famous witch trial in Lancashire 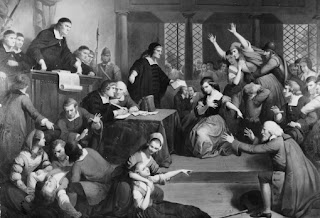 
The official account of the Pendle witches event was dedicated to Sir Thomas Knyvet.

The Wonderfull Discoverie of Witches in the Countie of Lancaster

Knyvet was part of the false flag operation known as the Gunpowder Plot.

The Gunpowder Plot was devised by Lord Cecil to provide an excuse for the top people to take more money and land away from the Catholics. Pendle was in a Catholic area. 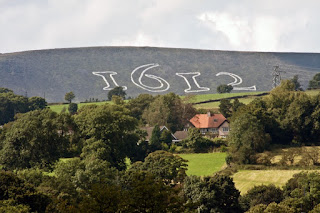 The story of the Pendle witches began, on 21 March 2012, with a dispute between Alizon Device, a granddaughter of Old Demdike, and a pedlar, John Law.

Alizon begged Law to give her some pins.

He refused and 'Alizon cursed him.'

A few minutes after their encounter Alizon saw Law stumble and fall, perhaps because he suffered a stroke.

He managed to regain his feet and reach a nearby inn.

Initially Law made no accusations against Alizon.

Later, Law blamed Alizon and her powers of witchcraft.

When this incident was brought to court, "Alizon confessed that she had told the Devil to lame John Law."

Alizon then "accused her grandmother, Old Demdike, and also members of the Chattox family, of witchcraft." 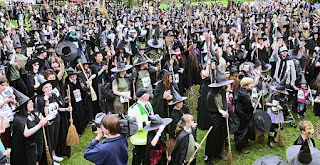 Alizon's father had "blamed the illness that led to his death on Old Chattox, who had threatened to harm his family if they did not pay annually for their protection."

The deaths of four other villagers that had occurred years before the trial "were blamed on witchcraft performed by Chattox.

"James Demdike confessed that Alizon had also cursed a local child some time before."

On further questioning "both Old Demdike and Chattox confessed to selling their souls."

The twelve accused were charged with the murders of ten people by the use of witchcraft.

Of the eleven who went to trial - nine women and two men - ten were found guilty and executed by hanging; one was found not guilty. 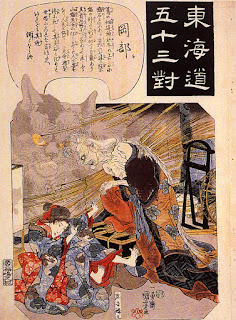 In Tanzania in 2008, President Kikwete publicly condemned witchdoctors for killing albinos for their body parts, which are thought to bring good luck.

In Nigeria, several Pentecostal pastors have mixed Christianity with African beliefs in witchcraft to benefit from the lucrative witch finding and exorcism business.

These pastors have been involved in the torturing and even killing of children accused of witchcraft.[103]

Over the past decade, around 15,000 children have been accused, and around 1,000 murdered.

Shooting in Tennessee.
Posted by Anon at 08:38