In the above video we see the Jews who love the Israeli child killers.

"Instagram post by an Israel Defense Forces (IDF) sniper boasting the murders of 13 Palestinian children in one day."

"He has seen us journalists go in and out of the hotel; he has seen that we survive.

"I think that in his pretending play he wants to be like us, someone who survives," Sommarström said.

The former NSA and CIA agent Edward Snowden revealed that the leader of the Islamic State of Iraq and Syria Abu Bakr Al Baghdadi was trained in Israel.


Israelis no longer hide the fact that they are fascists.

"The fascism and supremacism are now openly and shamelessly on display.

"This is a state in which racist football fans face no censure whatsoever for chanting 'Death to the Arabs'". 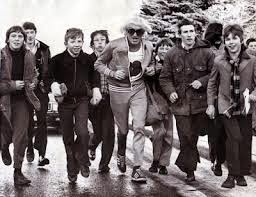 Who runs the boy brothels, such as Kincora?