In 2012, there was a 'false flag' shooting at the Ozar Hatorah school, a Jewish school, in Toulouse, in France.

Witnesses of the attack described the shooter as being "of European descent".

Mohamed Merah, accused of carrying out the shooting, reportedly died some time after the attack. Abdelkader Merah, a brother of Mohamed Merah, is currently (October 2017) on trial in connection with the 2012 attack in Toulouse in France.

Or, his 'lookalike' is on trial. 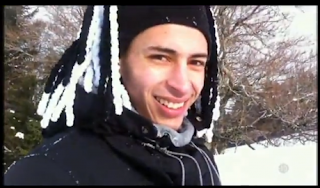 'Mohamed Merah' or a lookalike.


"Mohamed Merah's brother is married to a Jew and his sister lives with a Jew."

"A close friend of Nicolas Sarkozy, the chief of French intelligence, took Mohamed Merah to Israel."

In 2001, at an Ozar Hatorah school in Paris, a classroom was burned down.

This turned out to be an inside job.

(From Middle East to France, a Jewish school's journey Reuters)

It's a fake photo.

One witness described the killer as "quite fat" and having a tattoo or scar on his face.

The alleged Toulouse shooter, Mohamed Merah, would appear to be an innocent patsy.

It was alleged that Merah had been in Afghanistan.

Merah's lawyer, Christian Etelin, has said that Merah was in prison in France at the time he was supposed to be in Afghanistan.

According to Reuters, the Kandahar governor's office has said that "security forces in Kandahar have never detained a French citizen named Mohamed Merah."

In Pakistan, an intelligence official said that Merah had never been arrested in Pakistan either. "We have no information about him," the Pakistani official said.

One might suppose that French Interior Minister Claude Gueant was lying when he said that Merah had been to Afghanistan, and had carried out his killings in revenge for what he had witnessed there.

"More and more it looks like this guy was a patsy for a false-flag operation to build sympathy for Israel and a 'wag the dog' to take the media focus off of the massacre of 16 civilians (9 children) by Americans in Afghanistan earlier this month." - whatreallyhappened.com

IT ALSO LOOKS LIKE THE SHOOTINGS WERE DESIGNED TO HELP SARKOZY GET RE-ELECTED.

Of course it is possible that the French secret service smuggled Merah out of jail in France so that he could work for them in Afghanistan.

Reportedly, the REAL Mohamed Merah was not an Islamic fanatic.

Reportedly, the REAL Mohamed Merah was a fun-loving young chap who liked girls, who was described as being popular and polite, but who had been in trouble with the law.

"Just a few weeks ago, Mohamed Merah partied at a nightclub, and an acquaintance noticed nothing out of the ordinary.

One might suppose that Prosecutor Francois Molins was lying when he told reporters that Merah was a self-taught Salafi Muslim who had been to Afghanistan twice and had trained in Pakistan.

The official story is that Merah called a French television journalist and told him he carried out the attacks to protest France's ban on veils in public places, the nation's military presence in Afghanistan and in revenge for the deaths of 'Palestinian children'.

One might assume that this official story is a load of lying nonsense.

According to the acquaintance at the nightclub, Mehdi Nedder, Merah was not a fanatic.

A friend of Merah's, Kamel, says that Merah "was respectful and generous."

Merah's lawyer, Christian Etelin said the shooting attacks didn't fit the profile of Merah, whom he first represented in 2004, when Merah was a teenager.

"He was a polite and courteous boy" who used to work in a body shop, Etelin said. "He gave the impression of being in French social life."

Mohamed Merah's last conviction was for a minor motorcycle accident and driving without a permit.

He was sentenced to a month in prison.

At one time, Merah was held in a psychiatric unit for 10 days.

According to the mainstream media, Mohamed Merah is related to Sabri Essid 'who has connections to the CIA.'

Reportedly, Merah's mother married the father of Sabri Essid, 22, who was arrested in Syria in 2006 'at a CIA safe house for agents en route to Iraq'.

Toulouse - Does this look real or staged?

Above, we see Jean Dujardin, a French actor.