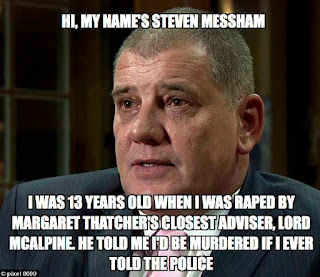 HOW THE ESTABLISHMENT SILENCES INNOCENT WHISTLEBLOWERS

Ben Fellows was persecuted and hounded by the Metropolitan Police, arrested, charged with perverting the course of justice, and imprisoned for blowing the whistle on Ken Clarke for alleged sexual assault. The harassement took place over a period of two years.

This is typical police behaviour when crime or negligence has been exposed by the public with regard to any public figure or entity. Make no mistake about it, there is a pattern: Brian Pead, Melanie Shaw, Peter Hofschroer, Chris Spivey, Sabine McNeill, and more.

Ben fellows is interviewed in the latter part of this video, after having won the court case in a trial by jury. He also describes how his whole life has fallen apart: no home, no job, no marriage, and more. He was innocent of perverting the course of justice.

Furthermore, another person has stepped forward with allegations agaist ex Lord Chancellor and Secretary of State for Justice, Ken Clarke. The audio is worth listening to.

"The people in positions of power, from local councillors, MP's, police, crown prosecution service, civil service and council employeees will use all the apparatus of the state, corporations and institutions under their control to defend the status quo. A whistleblower will face first denial of their assertions and then an attack upon themselves as a potential upsetter of the applecart or gravytrain."

Attempts are often made by the establishment to fraudulently section whistleblowers under mental health legislation.

Stan Richardson & NHS botched job: alleges Metropolitan Police harass him on the basis that someone has entered into the police computer that he has a mental health problem. He says he is constantly being pulled over by police for no reason, since he complained about a very serious dailed operation on his collar bone, and everyone closed ranks, to cover up. This included the alteration of medical x-rays. When the establishment closes ranks, it is always across departmental boundaries, and someone orchestrates it all. How do comments from corrupt doctors end up in police data bases, and why?

The public has always been suspicious about "convenient deaths".

hhtp://www.globalresearch.ca/ten-years-ago-the-death-of-dr-david-kelly-murdered-on-the-orders-of-her-majestys-government/5343229
Posted by Anon at 22:43