Reportedly, the CIA and its friends provided weapons to certain Chinese (above) in order to provoke the events around Tiananmen Square on 3 June 1989.

The 'Tiananmen incident' began with the brutal murders of a number of soldiers (photo below).

According to The Vancouver Sun, 17 September 1992:

"The CIA had sources among protestors, as well as within China's intelligence services...

"For months before the June 3 attack on the demonstrators, the CIA had been helping student activists.." 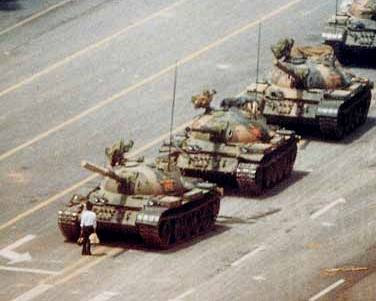 Gregory Clark, at the International Business Times, writes that the 1989 Tiananmen Square Massacre is a Myth: a British 'Black Information Operation'.

After 'CIA provocateurs' killed a number of soldiers, a number of citizens and students were killed near the Square by soldiers.

Outside a bus, the body of a soldier killed by the CIA's 'protestors'.

However, there was apparently no massacre in the square itself.

The story that Chinese troops machine-gunned hundreds of student protesters in the square has been discredited by:

1. Many witnesses there at the time - including a Spanish TVE television crew.

Protesters reportedly say that nothing happened in the Square other than a military unit entering and asking several hundred of those remaining to leave the Square late that night.

The BBC's John Simpson, who has links to MI6, was active in Beijing before the Tiananmen event, reportedly.

The 'fake' story of the massacre in the Square began with an article in Hong Kong's South China Morning Post.

The story was by an alleged protester whose whereabouts have never been ascertained and whose name is not known.

The New York Times then had the famous photo of a lone student allegedly trying to stop a row of army tanks from entering the Square.

The photo was actually taken a day after the riots, and showed the tanks moving away from the square.

There were photos of burning 'buses' that had been used to carry troops.

The soldier's buses were torched before any shooting began.