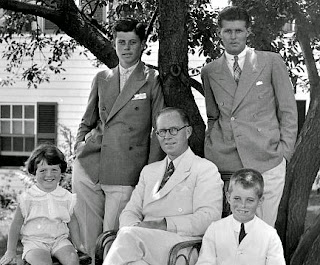 The CIA's Allen Dulles knew all about Jack Kennedy.

Inga Arvad, who was originally Danish, later became briefly engaged to Robert Boothby, a 'boy-loving' British member of Parliament in May 1945.

Were the Dulles and Kennedy families both part of the Powers-That-Be?

Robert Kennedy told presidential advisor William Attwood that a heavy lid must be kept on the Commission's investigation.

This was because Jack Kennedy and his family were up to their necks in Mafia-type activity. (4)


In 1962, a CIA memorandum stated that President Kennedy planned 'to liquidate President Sukarno.'

Around one million Indonesians died as the result of Kennedy's plan.

Allen Dulles and his controllers knew all about Papua's gold mine, the largest gold mine and the third largest copper mine in the world.

It is located in the province of Papua (western half of New Guinea), which is currently in Indonesia, and it is currently owned by Freeport-McMoRan.

Henry Kissinger has served on the board of directors of Freeport.

The Rockefellers have had a big interest in Freeport.

The Rockefellers have had a big interest in Standard Oil and Caltex which have both operated in Indonesia.

Obama's mother, who moved to Indonesia in 1967. Ann Dunham reportedly worked for a CIA front organisation. The CIA toppled President Sukarno in 1965 and then gave the military lists of people who were to be eliminated. "Blood ran in the streets. Villages were wiped out and a million people massacred..."


Allen Dulles had a cunning plan to topple the President of Indonesia, Sukarno, so that Indonesia's wealth could be controlled by US companies.

The Dutch, when they ran the Dutch East Indies, discovered the gold in Papua.

By 1960 Freeport had begun to take a keen interest.

Indonesia's President Sukarno with Johnson, who was president at the time of the 1965 coup in Indonesia which toppled Sukarno.

There were two attempts by the CIA to topple Indonesia's president Sukarno.

The first attempt failed and the second was 'a success'.

The first action, in 1958, under President Eisenhower, "involved no less than 42,000 CIA-armed rebels supported by a fleet of bombers and vast numbers of four-engine transport aircraft as well as submarine assistance from the U.S. Navy."

The CIA and MI6 built up certain 'Islamists' to fight Sukarno. 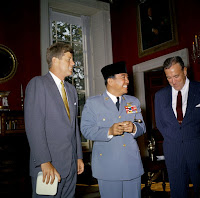 
In 1961, Jack Kennedy became the US President.

In 1963 Indonesia, with the help of the USA, obtained control over Papua, which was previously Dutch.


.
The CIA plan to remove Sukarno also involved the killing of around one million Indonesians.

In 1963, President Kennedy was replaced by President Johnson.

The second US action involved the CIA getting control of Indonesia's top generals, such as Suharto.

In 1965, the Indonesian military, working for the CIA, toppled Sukarno and replaced him with Suharto.


In 1966, Freeport founded Freeport Indonesia, Inc. and took over and began to develop Papua's famous gold mine.

Jack Kennedy was no saint.

These three girlfriends were also girlfriends of Anton LaVey, who has headed the Church of Satan.

Jayne Mansfield was a high priestess of the Church of Satan.

Marilyn Monroe was a participant in LaVey’s satanic rituals before LaVey founded his Church of Satan.

Both Jack and Robert Kennedy had affairs with Marilyn Monroe, and both visited her just prior to her mysterious death.

Zsa Zsa has been interested for years in the occult.

JFK also had relationships with other women connected with 'the Illuminati'.

The Kennedy Bloodline.
Posted by Anon at 00:59