JEWISH CONTROL: THE GUARDIAN AND INDONESIA 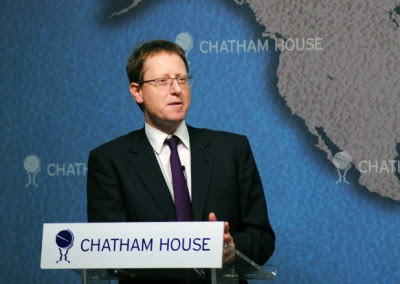 Jonathan Freedland of the Guardian.

Meanwhile, the Guardian continues to be secretly Zionist.

David Cronin, at Electronic Intifada, has written: How The Guardian Told Me to Steer Clear of Palestine.

"Early that year, I submitted an exposé of how the pro-Israel lobby operates in Brussels."

The Guardian did not want the story.

The Guardian did publish a diatribe by Daniel Taub, Israel's ambassador to the UK.

"The Comment is Free section of The Guardian, where Taub's nasty rant appears, is now overseen by Jonathan Freedland, a liberal Zionist...

"Taub's article was the second one published by The Guardian in as many months from a senior Israeli political or diplomatic figure.

"In February, the paper gave Yair Lapid, until recently Israel's finance minister, a platform to describe calls for a cultural boycott of Israel as 'shallow and lacking in coherence'...

"While Israel was bombing Gaza last August, it ran a leader accusing London’s Tricycle Theatre of making a 'bad error of judgment' in refusing to host a film festival sponsored by Israel...

"Freedland has tried to justify how '400 Palestinian villages' were 'emptied' by Zionist forces in 1948 on the grounds that 'the creation of a Jewish state was a moral necessity'...

"Freedland has been tipped as a contender for The Guardian’s editor-in-chief, a post that is soon to be vacant."

Most of the top journalists are now either Jews or crypto-Jews or Friends of Israel.

And most of the leaders of the Moslem world seem to be part of the Kosher Nostra as well.

Gottlieb-Jews Praying in the Synagogue on Yom Kippur

The Manchester Guardian was founded in Manchester in 1821 by a group of non-conformist businessmen.

The Manchester Guardian used to be seen as a left-leaning, Liberal newspaper.

The Guardian, as it is now called, has a large number of Jewish folks on its staff.

Manchester has a large Jewish population.

According to an article from the Centre for Jewish Studies, University of Manchester:

"The work of the Zionists in Manchester was greatly aided by the support, advice and encouragement of the staff of the well regarded national newspaper, the Manchester Guardian." (see below)

The Guardian appears to have become a vehicle for subtle pro-establishment propaganda.

"I write for the Guardian," said Sir Max Hastings in 2005,[8] "because it is read by the new establishment."

Let's look at some of the contents of the the Guardian website on the morning of 26 August 2008.

1. The lead story on the Guardian website is Britain's secret propaganda war against al-Qaida.

The writer, Alan Travis, tells us about a UK government unit called the Research, Information and Communication unit, or RICU.

Reportedly RICU is supplying propaganda to the BBC and other parts of the media.

Reportedly, this RICU has the job of criticising al Qaeda and trying to make it look bad.

According to The Guardian, a RICU dossier says that al-Qaida has been definitively expelled from large areas of Iraq and has lost ground in Afghanistan.

Now, what is missing from this Guardian news story?

We are not told that al Qaeda has been linked to the CIA and its friends.

We are not told that, reportedly, the CIA has used al Qaeda to carry out its dirty work.

We are not told that the forces opposing the US troops in Iraq and Afghanistan are mainly freedom-fighters; they are not al Qaeda.

So, the purpose of this Guardian story might appear to be disinformation.

2. Another lead story is entitled: Russian vote sets up clash with west

You may remember that Russia has allowed a large number of countries, such as Austria, Finland and the Czech Republic, to become independent.

Now Russian MPs have voted unanimously to back independence for Georgia's two breakaway republics of Abkhazia and South Ossetia.

However, the Guardian story appears to promote the NATO view that the Russians are the bad guys when it comes to South Ossetia.

According to The Guardian news story: "Russia was last night on another collision course with the west...

"The Duma passed the... motion by 447-0. Both houses are known for their slavish loyalty to the Kremlin...

"Russia is facing another chastening reprimand, this time from the financial markets."

Photo of C P Scott, former editor of the Manchester Guardian and friend of the Zionists, from www.spartacus.schoolnet.co.uk/JscottCP.htm

3. The Guardian website gives prominence to a right-wing feature article by Tim Montgomerie entitled 'The kind of cop we need.'

"During the Clinton years very little was done to combat the spread of militant Islam. Al-Qaida's planning for the 9/11 attacks ... began when the ever so reasonable Clinton was still in office.

"Europeans may want someone like themselves in the White House, but difficult times call for a president willing to eschew short-term popularity and pursue long-term respect."

Montgomerie fails to tell us that it was the CIA, reportedly, which promoted militant Islam.

Montgomerie seems to want another tough right-wing leader to be appointed president.

4. The Guardian has a LOT of Jewish writers. Often they are writing about their Jewish friends

In the 26 August Guardian we read: "Israeli actor Igal Naor mesmerised critics and viewers as the Iraqi ruler in the BBC series House of Saddam. He tells Rachel Shabi why he came to ...."

5. From an article entitled CP Scott and the Manchester Guardian ( produced by the Centre for Jewish Studies, University of Manchester ) we learn:

"The work of the Zionists in Manchester was greatly aided by the support, advice and encouragement of the staff of the well regarded national newspaper, the Manchester Guardian."

A. Harry Sacher worked at The Guardian from 1905.

Sidebotham believed that 'the interests of the Zionists coincided with those of the British Empire'.

Scott was won over by Weizmann.

Scott was able to introduce Weizmann to Lloyd George, Lord Balfour, Herbert Samuel, and other leading members of the government.

Scott leaked to Weizmann details of the Sykes-Picot agreement (secret Anglo-French negotiations on how to divide up the Ottoman Empire, including Palestine, after the War).

D. The historian Lewis Namier 'maintained the strong links between the Manchester Zionists and the Guardian'.

Who the HELL are Western Governments Really Serving??

nona-people: The 'Jewish Conspiracy' in the UK

aangirfan: Rich Jewish people or the Chinese or al Qaeda or the ...