The Jersey Care Inquiry is hearing evidence of life at the Haut de la Garenne home.

Young girls were forced to have abortions after being raped by members of staff.

The inquiry also heard about deaths.

In one case, it was alleged a boy took his own life soon after spending weeks locked away in solitary confinement in what were called detention rooms. 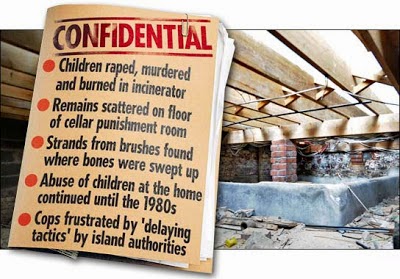 It is believed that many of the top people, such as Elvis, have been mind-controlled by the CIA and its friends.

Sir Jimmy Savile, friend of Israel and various UK prime ministers, was reportedly a frequent visitor to Bry Estyn, one of the 'boy brothels' run by John Allen.

In the early 1960s, Savile co-hosted the televised New Musical Express Poll Winners' Concert, with acts such as Cliff Richard, the Who, and many others.

Savile won an award from Mary Whitehouse's National Viewers' and Listeners' Association in 1977 for his "wholesome family entertainment".[43]

In an interview by Dr Anthony Clare for the radio series In the Psychiatrist's Chair in 1991, Savile appeared to be "a man without feelings".[46][47]

"There is something chilling about this 20th-century 'saint'" Clare concluded in 1992.[48]

In August 1988, he was appointed by junior health minister Edwina Currie[52] chair of an interim task force overseeing the management of Broadmoor Mental Hospital.

In March 2008, Savile started legal proceedings against The Sun, which had linked him in several articles to child abuse at the Jersey children's home Haut de la Garenne.[106]

He denied visiting Haut de la Garenne, but later admitted he had done so following the publication of a photograph showing him at the home surrounded by children.[107]