Canon Gordon Rideout was chaplain  on a military base in Middle Wallop, Hampshire, in the UK. 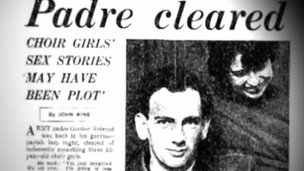 Canon Gordon Rideout went on to sexually abuse young girls and boys across the south of England.
Rideout was chairman of governors at St Mary's special school in Bexhill until 2009.

Vincent S. aged 10 yrs, from Grafton Children's Home, was taken to Elm Guest House (above) and to a house in Bexhill.
Reportedly, pedophile rings use children's care homes throughout the UK and Northern Ireland.