A victim of Leon Brittan says that he was abused while still at primary school.

A social worker says he saw photos taken in the 1970s of Leon Brittan dressed in kinky outfits with naked boys sitting on his lap.

"In one he was naked except for a frilly apron and cap, a sort of French maid's outfit. On his lap was a boy of about 12, ­prepubescent, stark naked...

"In the second picture, Brittan was wearing just briefs. There was a naked eight-year-old sitting sideways on his lap. He had his arms around this boy and another man was standing in the background."

A former child abuse victim has told the police that it was Leon Brittan who sexually abused him and a number of other children.

'Nick', the victim, says that Brittan was present when two men murdered a boy in a physical beating following sexual abuse.

It has also emerged that "it was Leon Brittan who was photograpphed entering the boy brothel known as Elm Guest House."

Leon Brittan was the government minister responsible for the police and the security service MI5.

There is a belief that the USA, UK and much of the rest of the world are being controlled by Mossad-CIA child abuse rings.

In March 1985, the Home Secretary Leon Brittan, pictured above right, visited the Medomsley detention centre, a place where boys were sexually abused.

The films showed boys and girls, under the age of 12, having sex.

The customs officer filed a report of the seizure and sent it up to Customs and Excise head office.

The customs officer heard no more about it. 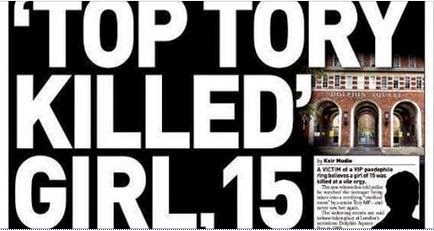 Many UK Conservative Party Members of Parliament, including Leon Brittan, have been linked to the Westminster child abuse scandal.

Two retired detectives have confirmed that a UK Conservative Party Member of Parliament visited the Kincora 'boy brothel' in Belfast.

One detective said: "A Conservative MP was coming over to the Northern Ireland Office quite regularly and has since died. We were told by criminal records in Scotland Yard London that he had a conviction many years ago for indecent behaviour ... in a gents' loo against another boy but his death meant we never got a chance to question him."

It has been suggested that the mainstream media is part of a psy-op designed to make Leon Brittan  and his UK Conservative Party look innocent, before the May 2015 General Election.

There have been various allegations about Leon Brittan.

A number of people said to have knowledge of the 'Westminster child sex scandal' have fairly recently disappeared off the scene.

"One idea being touted ... is to stage the deaths of one or more of the prominent politicians accused of raping young boys.

"The deaths would be attributed to a ‘heart condition’ or similar, and the public wouldn’t bat an eyelid due to the age of the accused."

Are paedophile politicians about to fake their own deaths? -COLEMANEXPERIENCE SEPTEMBER 23, 201

Mr Coleman appears to have disappeared.

In his youth, in 1955, Leon Brittan visited Larpool Orphanage, near Scarborough.

Scarborough was the home of Jimmy Savile.

The death has been announced of Leon Brittan, the former top UK government minister at the centre of the UK child abuse scandal.

The official story is that he died of cancer, at his home in London, aged 75.

"As for the assertions ... that members of the intelligence agencies attempted to smear the then Home Secretary, Sir Leon Brittan, the House will be well aware that it is not the Government's usual practice to comment on speculation..."

4. Allegedly, "the police once raided his home after a young boy staggered in to the street half naked, and when police asked what happened he told them about Brittan and his friends and took them to the house.

5. Leon Brittan was born to parents of Lithuanian Jewish descent. He is a cousin of Malcolm Rifkind.

6. Leon Brittan (above) has been accused by the UK Member of Parliament Jim Hood of 'improper conduct with children'.

7. Two children who disappeared in south-west London may be linked to Elm Guest House.

He is believed to have been murdered by a gang linked to Elm Guest House.

Ann Dexter-Jones
8. Ann Dexter-Jones knows a lot of interesting people, including Lindsay Lohan and Leon Brittan.
dailymail.co.uk/femail/
Some of these people are members of 'the Kosher-Nostra'.
Some have links to the spooks.
Some may be victims of Monarch brainwashing, which is designed, in part, to produce sex-slaves.

Russian spy Kim Philby who was a friend of Lord Victor Rothschild
Ann is related to Sir Oscar Deutsch and to Russian spy Arnold Deutch, who recruited Kim Philby.
In 1972 Ann worked in the Aga Khan’s office.
dailymail.co.uk/femail/

Gerald Ronson
Ann married and then divorced Laurence Ronson, whose brother Gerald was jailed for his involvement in the Guinness share-trading fraud.
Ann and Ronson have a child called Mark, a music producer who has worked with Amy Winehouse.
Ann married guitarist Mick Jones.
They moved to New York where they were neighbours of Yoko Ono, Bruce Willis, Demi Moore, Steve Jobs, Michael Douglas, Catherine Zeta-Jones.
They are friends of Robin Williams and Paul McCartney.