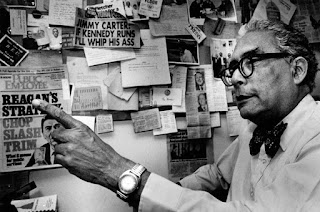 Simeon Booker, who died in December 2017.

In 1955, in Mississippi, 14 year old Emmett Till was tortured and murdered by a group of white men.

Emmett Till, a Black kid, was lynched after a white woman said she was offended by him in her family's grocery store.

Simeon Booker, a Black journalist, wanted to expose the truth.

At the Emmett Till murder trial, journalist Simeon Booker was segregated from the regular reporter pool and forced to work at a small card table in the back of the courtroom.

Two white men who were accused of murdering Emmett - and later admitted it in a Look Magazine interview - were acquitted in 1955 by an all-white, all-male jury, and so could not be retried.

The woman, who said she was offended by Emmett, was Carolyn Bryant Donham.

She now confesses that her allegations - that Emmett grabbed her and was menacing and sexually crude toward her - were false.

Woman Linked to 1955 Emmett Till Murder


Simeon Booker was a reporter for Jet and Ebony magazines.

Booker covered the funeral of Emmett Till.

Booker stood beside Till's mother as she threw open the coffin and removed the rubber bag from her son's mutilated face.

Booker was often threatened and attacked by white fascists.

1. Emmett Till was from Chicago.

In 1955, fourteen year old Emmett went to visit a small town in Mississippi.

He allegedly whistled at a woman outside a store.

A group of men later beat Emmett to a pulp, shot him dead and dumped him in a river.

The husband of the woman who had been allegedly whistled at, and his half brother, were arrested.

The evidence against them was 'pretty overwhelming'.

The jury found the two men not guilty.

In 1956, the two men admitted in an interview with Look magazine that they had killed Emmett.

Emmett was black and the jury was white.

2. In 1955, Clyde Kennard, a former army sergeant, tried to enrol at Mississippi Southern College in Mississippi.

He was sent away.

University officials planted illicit alcohol and stolen chicken feed in his car and had him charged with theft.

He died in prison.

He was shot to death in broad daylight at close range on the lawn of the Lincoln County courthouse in Brookhaven, Mississippi.

Some reports say there were many white witnesses including the local sheriff who saw a white man covered with blood leaving the scene.

No witnesses would come forward and three men who had been arrested went free.