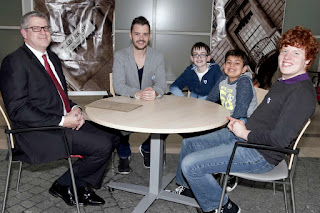 The MI5 boss Andrew Parker (left) meets children brought to him by the BBC.

Allegedly MI5, MI6, Mossad and the BBC have deep involvement in the top child abuse rings.

Ceri Thomas has made a BBC TV programme 'attacking the victims of child abuse'.

Ceri Thomas is the editor of the BBC's Panorama programme and the former editor of BBC Radio 4's Today program.

Ceri Thomas has been accused of repeatedly inviting Israeli politicians, and their friends, to be interviewed as opposed to the other side.

While Ceri Thomas was editor of the Today programme, he is suspected of having covered up the sexual abuse of youngsters at Oxford and Cherwell Valley College. 
Some people have tweeted about Ceri Thomas's Panorama programme attacking the victims of child abuse:

VIP Abuse Panorama highly selective and at times difficult to follow - Failed to answer their own question: What's the truth?

Just been told @BBCPanorama won't be using me in tonight's programme. I was interviewed by them for 1.5 hours on what I knew about VIP CSA

Told just after midnight that @BBCr4today have decided not to interview me at 7.15am about the @BBCPanorama VIP child abuse programme.

Laughable OMISSION of Richard Kerr from the Panorama programme.Wonder why

The BBC has an interview with a survivor of child abuse whose story of child slavery aged 11 is verifiable. Why are they not broadcasting?

Panorama’s reporting of basic facts re ‘Jane’ case just wrong. For proper reporting, see Exaro. But site is down at moment for some reason.

"The Panorama program didn't even touch on the so called pedo ring the show was supposed to be about. Only individuals and victims, mostly seemingly unrelated to a/ the ring, were mentioned."

When the BBC was trying to discredit the 9 11 truth movement, it selected only certain small parts of the evidence and only certain spooky witnesses for examination.

Now the BBC is trying to discredit the idea that top people have been involved in child abuse rings.

The BBC is again selecting and examining only small parts of the evidence and certain shaky witnesses.

The BBC should be closed down.


"David Aaronovitch Posts Fake Book Reviews; and Lies About Why"