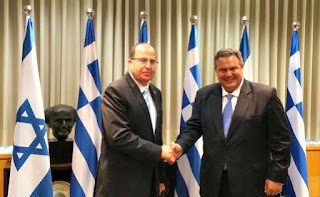 Israeli Defense Minister Moshe Ya’alon has made an agreement with his Greek counterpart Panos Kammenos at Israel’s Defense Ministry.

On 19 July 2015, Greece's ruling Syriza party signed a military accord with Israel.

Greece is now as close to Israel as the USA.

On 17 August 2010, it was announced that Israel and Greece were seeking to expand military ties

Former Greek Prime Minister Andreas Papandreou once compared the Israelis to the Nazis.

In 1983, in the Greek Parliament, Ioannis Koutsoyannis blamed "the Jews, the Masons, the CIA and Moshe Dayan" for preparing and coordinating the 1967 military coup in Greece.

The bad guys have had a series of cunning plans designed to get control of Greece.

One of Mossad's aims was to turn Greece against the Palestinians.

And then there is the Greek economy.

"Beginning in 2001, Goldman Sachs concocted an elaborate financial scheme whereby billions in 'currency swaps' were funneled into Greece, only to be squandered and embezzled by government officials...

"Greek newspapers such as Avriani are openly citing a Jewish plutocracy for plotting their nation’s demise...

"In a Feb. 11 article entitled 'Greece Under European Union Diktat,' Peter Schwarz observed, 'The crisis in Greece is attracting the most parasitic representatives of finance capital, whose methods resemble those of the Mafia, with the European Commission serving as the consigliore to the godfathers of finance.'

"One of the men he alluded to was Jewish speculator George Soros."

Papandreou took Netanyahu on a trip to an island off the Athens coast, using a missile boat Israel sold to Greece.

Israel and Greece signed a defense cooperation agreement in 1994.

And then there is the CIA.

The CIA and its friends have been active in Greece for some time.

1. In 1944, in Greece, a large demonstration in Athens, against British interference in the government, was dissolved by gunfire from hidden soldiers.

25 protesters were killed and 148 wounded.

2. In 1967, in Greece, CIA-backed colonels carried out a military coup, resulting in a 'fascist' dictatorship.

Thousands of Greeks were tortured and murdered by the CIA backed 'fascists'.

3. In 1985, 15-year-old Michalis Kaltezas was shot by a police officer, triggering violent clashes between youths and the police in Athens.

4. In December 2008, Greek youths rioted after the police shot a boy

15-year-old Andreas Grigoropoulos was shot dead on 6 December 2008 by a police officer.

The CIA, reportedly, has used acts of terrorism to keep the right-wing in power in Greece.

"In the April 1967 national elections in Greece, the veteran liberal leader George Papandreou seemed certain to be re-elected as prime minister.

Papandreou had been elected in 1964 with the only outright majority in the history of modern Greek elections.

A joint campaign by the Greek military and the CIA to unseat him began immediately...

The Gladio 'Sheepskin' group was involved in a campaign of terrorist bombings, which were blamed on the left.

And two days before the election campaign was to begin, a military coup brought to power a junta led by George Papadopoulos, a member of the Greek intelligence service KYP.

The CIA had created the KYP and Papadopoulos was on the payroll of the Agency for some 15 years.

Along with hundreds of other KYP officers, he had received training in anti-subversive techniques in the United States.

Papadopoulos was "a great believer in Hitler's new order" ...

He plunged Greece for the next seven years into a nightmare of martial law, censorship, arrests, beatings, torture and murders.

Before the end of the year, Amnesty International reported that "torture as a deliberate practice is carried out by the Security Police and the Military Police."

The Greek junta contributed $549,000 to the 1968 Nixon-Agnew election campaign in the United States.

A Senate investigation to discover if this was CIA money finding its way back home, was abruptly cancelled at the direct request of Henry Kissinger. "