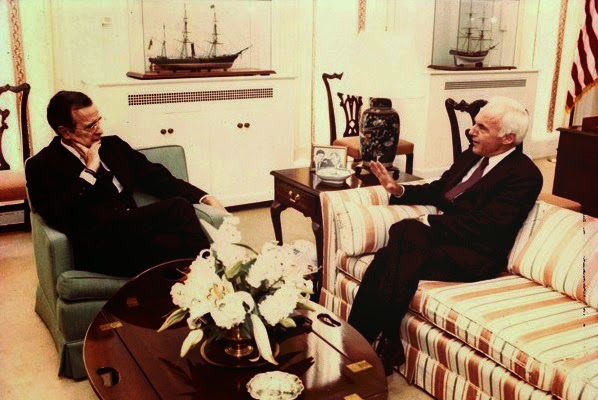 Robert Gray (above right with Bush) has been linked to several US presidents and to child abuse.

Hill and Knowlton and Robert Gray "have been implicated in the BCCI scandal, the October Surprise, the House page sex and drug scandal, Debategate, Koreagate, and Iran-Contra."

Robert Gray's associates included William Casey, Rev. Sun Myung Moon, Oliver North and Edwin Wilson, all of whom are linked to the CIA. 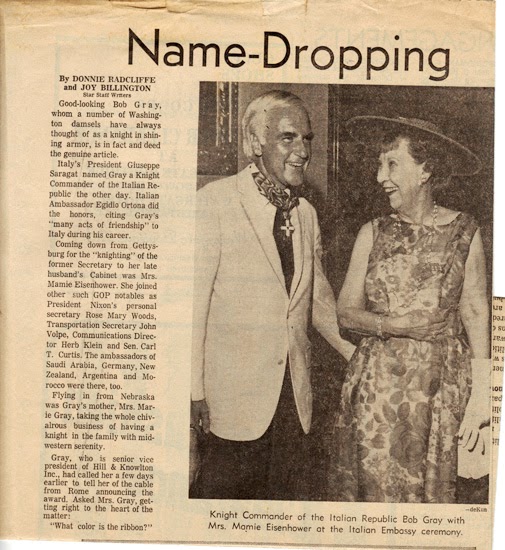 Gray was gay and his partner of 20 years was Efrain Machado.[2]

Gray was the chairman and CEO of Hill and Knowlton, which has been accused of being an unelected shadow government. 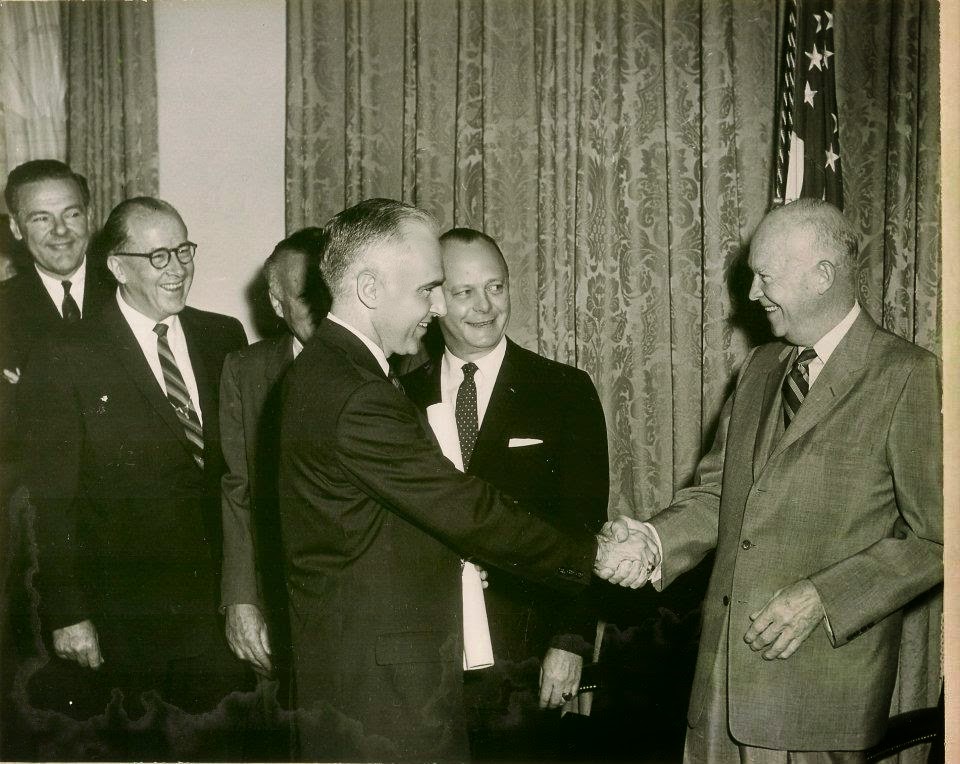 Gray was Eisenhower's appointments secretary and then secretary of the cabinet.

Gray was reportedly a specialist in homosexual blackmail operations for the CIA.

During the Watergate era, Robert Keith Gray served on the board of Consultants International, founded by CIA agent Edwin Wilson. 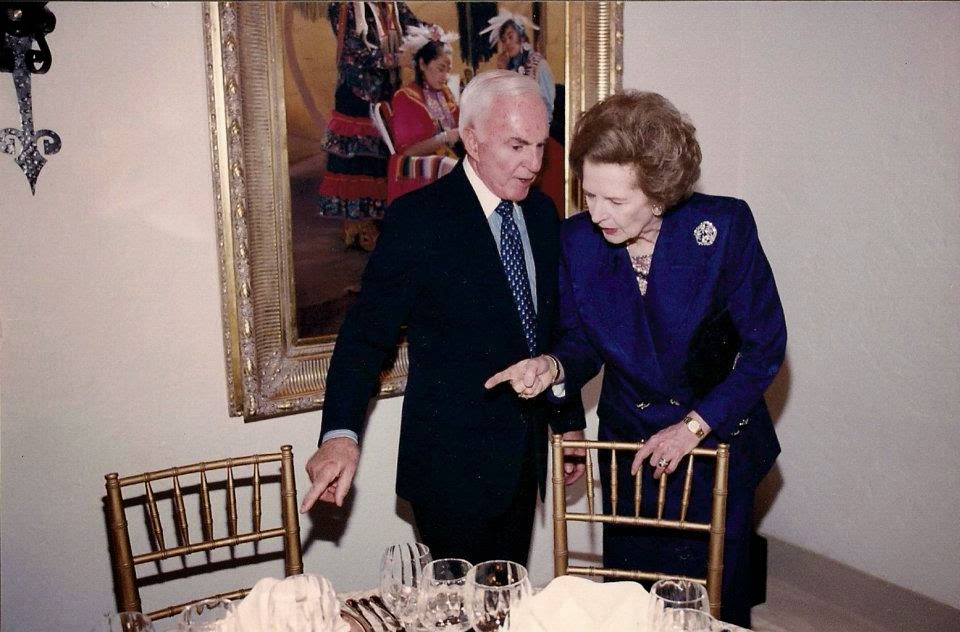 Gray helped manage Richard Nixon’s campaign for the presidency in 1968 and advised President Gerald Ford from 1974 to 1976. 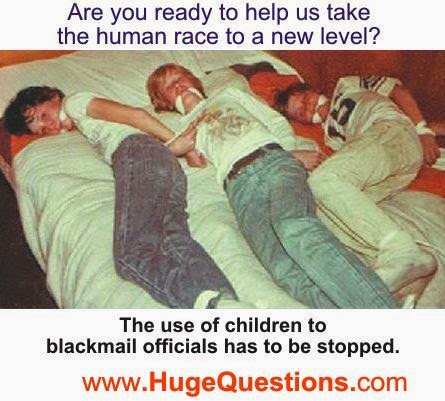 GEORGE SR. and uncle of JR,PRESCOTT BUSH, JR. and BARBARA BUSH have been on BOARD of DIRECTORS of AMERICARES, a STAMFORD based charity intimately involved with a child prostitution ring in GUATAMALA.

JOHN DECAMP mentions AMERICARES in connection with HILL&KNOWLTON (HK) public relations firm who sent their agent, CHARLES PERKINS, to NYC to help with public image of COVENANT HOUSE whose youth organization director, FATHER RITTER, was under attack for child molestation.

ROBERT MACAULEY, the founding director of AMERICARES and longtime friend and classmate of GB, SR at YALE and ANDOVER's PHILLIPS ACADEMY, provided a lot of money to this organization.

Furthermore, FATHER RITTER was a frequent guest at MACAULEY's estate in CONNECTICUT, according to former COVENANT HOUSE employee.

The involvement of Hill and Knowlton is significant, because as noted by MR DECAMP, its CEO ROBERT KEITH GRAY was a close friend of HAROLD ANDERSEN, a principal in FRANKLIN COVER UP, and also " reportedly a specialist in homosexual blackmail operations".

As CEO and chairman of one of th two largest PR firms in the world, GRAY had such blue=chip clients as AT&T, IBM, XEROX,and DUPONT.

Like GEORGE BUSH, HAROLD ANDERSEN, owner of the largest newspaper in NEBRASKA, moved in the upper circles of US INTELLIGENCE community. He did in NEBRASKA what HARTFORD COURANT does in CONNECTICUT to keep the real news from being reported about satanic ritual and sexual abuse of children.

The CHICAGO TRIBUNE, owned by same corporation that recently purchased COURANT, has worked hand in hand with this CIA cover up, as, of course, has WASHINGTON POST with too many CIA/CFR/ BILDERBERGER connections to mention.

Joël van der Reijden, at ISGP, 29 July 2008, shows us the connections between Iran-Contra, BCCI and the Dutroux Affair which involved child abuse and child murder.

Some of the points made:

1. The Belgian police's ATLAS Dossier concerns a case opened in 1994.

Reportedly, according to the ATLAS document, the following were involved in illegally shipping weapons to Iran and Central America:

DUTROUX was at the centre of an international child abuse, child torture and child murder ring that was linked to top people.

2. "The Belgians that were involved in Iran Contra have been accused of child abuse (Boas, Mathot, Vanden Boeynants and Beaurir)..."

3. "North and his employer, vice president and later president George Bush, were uncomfortably close to the Franklin child abuse affair in the United States.

"Both were mentioned by witnesses as having attended the parties of alleged child abuser, Satanist, Contra supporter, money launderer and drug dealer Lawrence E. 'Larry' King. [17]

4. "Iran-Contra, which is what the ATLAS document largely comes down to, is just one of many scandals tied to the same international network of conspirators, consisting of :

"It was during the BCCI scandal that senior executives of the bank actually gave a name to this network. They referred to it as the'black network'."

"Consider, for a moment, what it might mean to have an organization that could pull off the following:

Manipulate the Central Intelligence Agency and the spy agencies of Britain, Pakistan, Saudi Arabia, China, Syria, Israel and who knows how many others all at the same time...;

Launder drug money for the Medellin cocaine cartel in Colombia;

Bankroll Abu Nidal, the most notorious terrorist in the world;

Procure prostitutes, some of them children, for traveling Middle Eastern potentates;

Rig international commodity markets so that a few insiders could make hundreds of millions of dollars in a single day..."